The Chicago Rehab Network is a multi-cultural, multi-racial coalition of community-based organizations which revitalize neighborhoods primarily through the development and rehabilitation of housing for low-income community residents.  CRN and its members are dedicated to empowering communities without displacement and to building a strong affordable and accessible housing development movement in Chicago, throughout Illinois, and across the nation.  CRN strives to meet the needs and promote the common goals of its members which foster socially and economically viable communities. 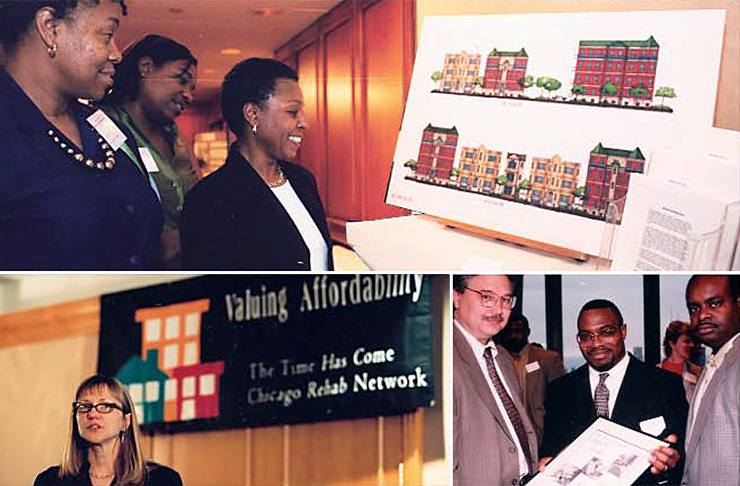 The consistent voice on affordable housing

In 1977, a small, informal group of community-based not-for-profit housing developers and advocates in Chicago came together at Erie Neighborhood House in Chicago’s West Town community to share information and expertise about how to best serve city neighborhoods. Their goal was to revitalize city neighborhoods through the development and rehabilitation of housing.

“The Network has been the consistent voice on affordable housing since it started,” says Patricia Abrams, Board President of CRN and executive director of The Renaissance Collaborative in Chicago’s Bronzeville neighborhood. “The Network and its members understand that housing provides a foundation for people—it’s tied to everything we do that forms a community.”

Getting the job done

CRN’s members have shown over the years that they can identify the housing needs of city communities—they have the tools and know-how to develop that housing. More than twenty-five years—and 15,000 units of rehabbed housing—after those initial meetings, CRN continues to work with its members to create, preserve and advocate for affordable housing in city neighborhoods and now throughout the metropolitan Chicago area.

Over the years, CRN has helped its members through a wide range of trainings, education on specific issues and research and advocacy on affordable housing. At the same time, it is those members who provide leadership on key housing issues that stems from the most telling reality of all—the state of housing in their neighborhoods and across the region.

One of the organization’s most important functions has been to demand accountability from government agencies that have the resources and influence to impact housing policy in Chicago and around the state. In Chicago, CRN has worked to make sure that community concerns have been reflected in the city’s last three 5-year plans for affordable housing. The organization’s work has also been manifest in recent years in quarterly reports completed by the city’s Department of Housing that provide concrete information about the state of affordable housing in the city.

The Rehab Network’s efforts have also included successfully advocating for the creation of the city’s Tax Reactivation Program; helping to negotiate community reinvestment agreements with a range of Chicago banks; leading a successful effort to pass the Illinois Affordable Housing Tax Credit, and encouraging the Cook County Board of Commissioners to pass key tax relief proposals to prevent displacement of long-term residents.

Challenge for the future

After more than three decades, CRN members remain as committed to the organization’s mission as ever. What has changed during that time, though, is what people mean when they talk about affordable housing. For much of the last quarter-century, “affordable housing” referred to housing for those in poverty.

Today, the picture is very complex. The federal commitment to housing has been dramatically shrinking, so community-based housing developers have found other ways to do their work. Meanwhile, the cost of housing—and living—has increased to the point where people in neighborhoods all over the city and state struggle to find a decent place to live.

Yes, people living in poverty still need affordable housing—but so do thousands of working people. These days, one can find people who can’t afford to live where they work or pay for a home in their neighborhood in every corner of the city—and state.

Gené Moreno, Former Director of Policy and Advocacy at CRN, sees a movement for affordable housing that builds on the commitment of community-based housing developers. “We want to grow the numbers of people who think about what we should do about affordable housing,” Moreno says. “Our basic goal and values, however, remain the same. Communities need affordable housing for all of their residents.”

The Chicago Rehab Network is a proud recipient of the 2006 MacArthur Award for Creative and Effective Institutions.

Learn more about the award »

With your help we can build strong neighborhoods, strengthen capacity, and cultivate community leadership.

Follow us to stay up-to-date on the latest news at CRN.